There are a lot of big games coming out this year, and after The Last of Us Part II, everyone is eagerly anticipating the release of Cyberpunk 2077. Unfortunately, the game has been delayed a third time.

As told in a letter from CD Projekt Red, Cyberpunk 2077 will have to move from its September release date to November 19. The announcement reads:

“We are fully aware that making such a decision costs us your trust and trading trust for additional time is one of the hardest decisions a game developer can make. And despite we think it's the right decision for the game, we'd still like to apologize for making you wait longer. Our intention is to make Cyberpunk 2077 something that will stay with you for years to come. In the end, we hope you understand why we did what we did." 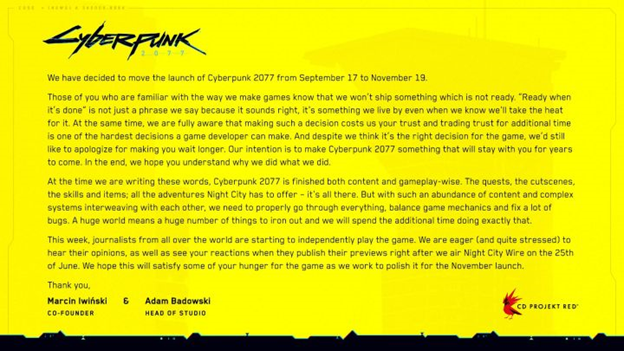 When it comes to fixes, the devs iterate that the content and gameplay of Cyberpunk has already been finished. The real problem lies with the numerous bugs that plague the game; you can’t have something so expansive and not have some details to iron out.

With the latest scandal of Crunch Culture revealed for studios like NetherRealm and Naughty Dog, hearing that games get delayed in order to give developers more time seems like the better path.

For more upcoming games, you can check out our respective lists for Upcoming Xbox One, Upcoming PC, and Upcoming PS4.