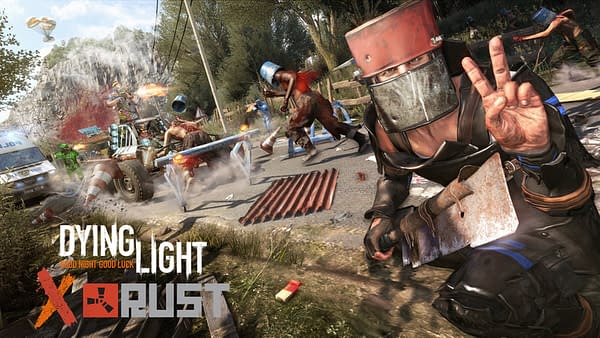 Though we don’t have a release date for Dying Light 2 yet, Techland is teaming up with Facepunch Studios for a limited in-game crossover event.

Now, let’s put all that equipment to good use and see just how long you can survive against flesh-hungry zombies and ruthless bandits. What’s more, the scientists from Rust must’ve heard about the Harran virus and have come to investigate the deadly pathogen. Surprise them with your amazing parkour skills and show them what you’ve learned from years of fighting the infected. They’re not the only enemies you’ll encounter, though. In both the Slums and the Old Town, you’ll find outposts full of Rais’ bandits. They’re dangerous places, but you’ve been to such by now, haven’t you? Crash through the front door and wreak havoc among the enemy lines or take them silently, through stealth. They won’t know what hit them, and you’ll leave with powerful elemental C4 explosives. You’ll use them better anyway, right?

The Rust bundle will be available for free for Dying Light players. It will include some new skins and weapons inspired by the former. Sadly, this crossover will only be available for PC. But, the devs promise that the event will also be coming to consoles sometime next month.

The Dying Light x Rust crossover takes place from April 19—26 for the PC. The crossover event will also be available for Xbox One and PS4 sometime mid-May.

For more information about the crossover event, you can check here.

With Dying Light 2 still without a release date, this crossover should build up some hype for the game before any official announcement. We haven’t gotten any updates for a while, but we're hopeful that the highly-anticipated sequel gets its launch date sometime within the year.

Dying Light is currently available for PS4, Xbox One, PC, and Mac OS. Meanwhile, Rust is also available on PC, PS4, and Xbox One. For more hotly anticipated titles, check out our upcoming games page.