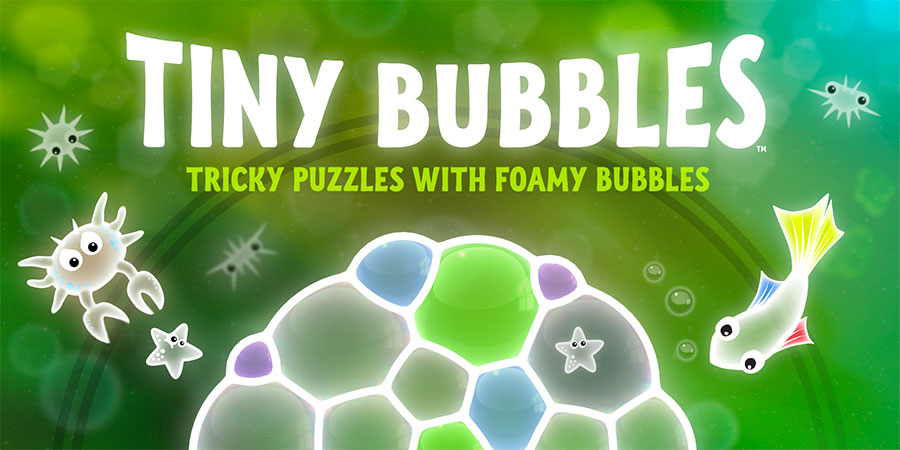 How Foam Physics Inspired the Game Tiny Bubbles, An Interview with Stuart Denman

Tiny Bubbles, a puzzle game for iOS, Android and PC, was recently recognized as whatoplay’s 3rd Best iOS Game of the Year 2018; as well as other awards and nominations including in the Google Play Indie Games Festival.

Thank you for the opportunity to chat with you about Tiny Bubbles. Congratulations! The game is a critical success and it has received numerous awards including our Best iOS Games of 2018. I’d say it’s one of the more addicting yet relaxing mobile games.

Raine: You’ve been developing games for many years -- founding several studios that worked on hardcore PC games -- and now, with Pine Street Codeworks, your first release is a calm, relaxing mobile title. Can you tell us more about your journey from hardcore to mobile?

Stuart: I began working in 1994 on one of the first fully-3D (6 degrees of freedom) engines. My first game, Drakan, ended up being one of the first games to support GPU hardware. Drakan was an action-adventure about riding dragons and then hoping off to explore on the ground. I focused mainly on the technology side. After 15 years of working on AAA console games for companies like Midway, Activision, Sony and Microsoft, I had learned a ton about art and game design and became interested in making my own games. I was tired of working on the same games about shooting and blowing stuff up, or games that are derivative of other games. I wanted to make a game with a completely new game mechanic that made me feel like the first time I played Tetris. The medium of mobile games was attractive to me because the audience was much more broad at the time than on PC and console platforms.

Raine: The bubbles in the game behave similarly to those in the real world. I read on the press kit that Tiny Bubbles was inspired by your grandfather’s research on actual soap bubbles. Can you tell us more about this?

Stuart: My grandfather, Cyril Stanley Smith was one of the scientists who studied plutonium on the Manhattan Project. At the time, little was known about the properties of this unusual metal. He was a metallurgist and had a deep interest in the structure of materials. It turns out, soap bubble foams share a similar structure to how metals look under a microscope when they cool and the crystalline grains start to form. So after WWII, he studied soap bubble foams and published many papers on their properties and relationship to metals. He had a big influence on me when I was growing up. He had an infectious curiosity and fascination for nature. He died many years ago, but I couldn’t shake the idea that there must be a game somewhere in these amazing foams with unusual, yet familiar behavior.

Raine: We’ve been reading a lot of requests for more of the game. Are there plans to release new levels, worlds or a sequel?

Stuart: Yes, I’m overflowing with ideas on where I could take it next, so there will be more content and new gameplay at some point. One of the ideas I’m working on is a new creature that’s filled with ink and you have to manipulate the bubbles in a certain way to get him to release the color into the bubbles. Fans of the game can chat with me about these ideas on our Discord Server. I’m also excited to announce that soon our music composer Kristoffer Larson will be releasing an Original Soundtrack for the game with 5 brand new songs and extended versions of existing tracks. I just heard a preview of this and it’s absolutely amazing. This will be a fantastic album for fans of Ambient and Techno. We’ll have links soon on our website.

Raine: Now that we’re talking about it, are there also plans to launch it on other platforms?

Stuart: Yes, definitely. Right now I’m focused on this as well as supporting existing platforms. We’ve already announced our partnership with Hatch, Rovio’s mobile streaming service that’s been popular in Europe. Tiny Bubbles is also available now on PC/Mac/Linux as well as Android and iOS. It doesn’t yet support dual-analog sticks, so that’s one of the features I’m working on to allow the game to play on more systems. We will have more to announce about that on Facebook and Twitter (@pinestcw) in the coming months.

Raine: In a lot of ways, this game mimics phenomenon found in nature, which we rarely see in casual games. Should we expect more games of this type from Pine Street Codworks?

Stuart: Absolutely, in fact that’s my inspiration and I continue to look for new ideas inspired by nature. Sometimes I’ll just see a screenshot of some leaves and the way the lighting hits it can create so much emotion. Its like this “spider sense” that I get sometimes that calls to me “there must be a game in here somewhere.” The hard part is finding it and that requires a leap of faith and the time to just play around as a game designer to find the fun. It’s the best part of my job.

Thank you so much for taking the time to answer our questions. We wish you more success in 2019 and the coming years.