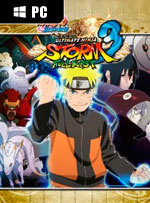 Naruto Shippuden: Ultimate Ninja Storm 3 features the most extensive character roster of any game so far in the series, letting fans engage with a huge number of their favorite personalities from the series, be they friend or foe. In story mode, players will be thrown into a series of thrilling adventures set in the village of Konoha, while the game’s electrifying fights will be punctuated with massive scale boss battles, including a fearsome confrontation with the gargantuan Nine-Tails.

Gamestop
3 Ratings
10.0
This game has not been reviewed. Be the first to review it!

7.90
Dominic Tarason—Nov 05, 2013
Newcomers who persevere and keep on bashing away until they master the fundamentals will be rewarded greatly, but in all honesty, you might be best off tracking down at least the first NUNS game on PS3 and Xbox 360. For existing fans of the series, these are the ninjas you’re looking for. Network quirks aside, if you’ve got a PC capable of making NUNS3 sing, you won’t be disappointed.

Mark of the Ninja

Heroes of the Storm