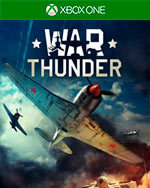 War Thunder is a next generation MMO combat game dedicated to World War II military aviation, armoured vehicles, and fleets. You will take part in many of the major combat battles fought during World War 2 and the Korean War, fighting with real players from all around the world. The genuine World War II experience isn’t limited to the skies. The massive historical battles featured in War Thunder cannot be fought by aviation alone, so the game will also expose players to combat on land and at sea. Currently the game is in open beta stage and full functionality is yet to come.

Game Faqs open_in_new
20 Ratings
8.20
This game has not been reviewed. Be the first to review it!

8.00
Sam Bishop—Nov 02, 2018
All in all, this is an online military shooter for people who like the idea of armoured warfare that spills out onto the water, across the land, and then up in the air. There is enough detail here for the real hardcore players to dive into, while it also has something for those who want a more arcade experience thanks to a range of options to make things simpler.
open_in_newRead full review

This War of Mine: The Little Ones