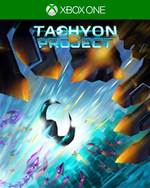 In Tachyon Project you take control of Ada, a software program that has taken conscience and that was designed to hack into the most secure servers on Earth. After some rather misterious events, Ada is thrown out of the test server where it was living and out into the Internet, but when she tries to go back there she finds she's unable to. She'll then start a journey to uncover the truth behind what happened to her creators, which she considers her parents. In the process she'll find out that things were a bit more complex than she initially thought.

Game Faqs open_in_new
8 Ratings
6.62
This game has not been reviewed. Be the first to review it!

7.50
Justin Celani—Jul 16, 2015
I’ll admit, I felt the visuals along with the soundtrack came a little too close for my liking, where I almost had to ask myself “what game am I playing again?” Tachyon Project seems to take a lot of inspiration from Geometry Wars but puts its own spin on things. Taking cues from one of the best twin stick shooters ever made, isn’t a bad thing in the slightest.
open_in_newRead full review

7.00
Kim—Jul 25, 2015
It’s far from perfect, but despite its gripes and grizzly bosses, there’s something charming about Tachyon Project that makes you keep wanting to play. Its very simplistic nature makes it easy to pick up and play, making you want to indulge in “just one more level”.
open_in_newRead full review

7.00
Adam Dileva—Jul 19, 2015
Once you do complete the campaign, the lack of compelling extra modes really does hinder the title as a whole, again, unless rising up on the leaderboards are your thing. Tachyon Project does enough things to make itself stand out against the bigger names in the genre and be competent, but falls short on doing much else to really rise above and beyond the kings of the category.
open_in_newRead full review
See all critic reviewsarrow_forward