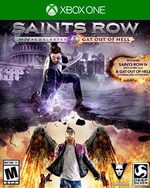 After saving the world from a terrorist attack the leader of the 3rd Street Saints is elected to become President of the United States. Things go reasonably well for The President until an alien warlord named Zinyak attacks the white house and abducts his entire cabinet. Now stuck inside a reality bending simulation, the President and the Saints fight to save themselves, Earth, and the entire galaxy… and if that all sounds crazy to you, trust us: we’re just getting started.

Game Faqs open_in_new
71 Ratings
8.12
This game has not been reviewed. Be the first to review it!

7.80
Mikel Reparaz—Jan 19, 2015
Saints Row IV is just as much silly, largely challenge-free fun in Re-Elected as it was originally, even if it doesn't look as impressive as other recent remasters. Gat out of Hell’s short but fun demonic adventure doesn’t really justify re-buying the whole thing, but the Re-Elected package is the best way to experience Saints Row IV’s power trip for the first time.
open_in_newRead full review

9.00
Jaz Rignall—Jan 19, 2015
A ludicrous, crude, outrageous, laugh-out-loud barrage of jokes, bullets, madness and mayhem. The visuals are occasionally weak, but as a package, Saints Row IV: Re-Elected and Gat Out of Hell showcase just how fun an open world game can be.
open_in_newRead full review