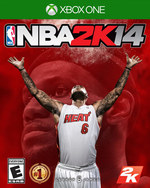 NBA 2K14 marks the return of the world's biggest and best NBA video game franchise. Following more than 38 Sports Game of the Year and "Best Of" mentions last year, 2K14 is set to rule the virtual hardwood once again. This year, 2K joins forces with the league's most dominant force: LeBron James. With a soundtrack hand-picked by the King, refined controls featuring the new Pro Stick, new Signature Skills, enhanced defense including blocked dunks, and more, NBA 2K14 will raise the bar yet again.

3D Juegos open_in_new
4 Ratings
9.50
This game has not been reviewed. Be the first to review it!

8.00
David Hinkle—Nov 21, 2013
As a first step forward, NBA 2K14 on Xbox One is a promising indication of things to come. Sure, it's missing the current-generation's marquee mode, but the on-court action is every bit as engaging and hospitable as it's always been, and the visuals are more impressive than ever. NBA 2K14 suggests we're well on our way to a future where video games and reality collide, becoming that much more difficult to distinguish from one another – and that is an exciting prospect.

8.50
Mary-Anne Lee—Dec 27, 2013
With great graphics come great loading times, though. PS4 is practically a PC, albeit a nicely-packaged one, and we all know what PC games come with: load times! The load time for NBA 2K14 is pretty long when waiting to get into games, and the installation time is longer still. ...Long load times nonwithstanding, features like MyTeam and NBA Today are not available if you aren’t able to connect to the 2K Sports server either.

8.00
Alex Navarro—Nov 23, 2013
It's a solid roster of features that only looks a bit more skeletal in comparison to what was released last month on PS3 and 360, and it's more than enough to make NBA 2K14 an easy recommendation on these new platforms. ...But those seams in the fabric aren't enough to detract from what is otherwise a terrific game of basketball. If anything, NBA 2K14 signals that great things are on the horizon for this franchise on these new platforms, and that things are already off to a very good start.
open_in_newRead full review
See all critic reviewsarrow_forward