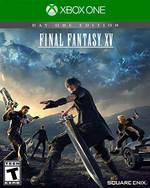 Set in modern times but with a touch of medieval influences, Final Fantasy XV focuses on Noctis Lucis Caelum, the prince of a dynasty which rules a city state that has the last remaining crystal. After the crystal is stolen by an invading nation, Niflheim, a global conflict ensues with all other nations wishing to gain it for themselves. Alongside the main protagonist, Noctis is joined by a military tactician Ignis Scienta, who can deftly handle a katana in battle, a melee fighter named Gladiolus Amicitia, gun-wielding Prompto Argentum, and head of the Royal Family Guards Cor Leonis. There's one other character that appears to get close with Noctis, even if her connection with him is still unknown.

Game Faqs open_in_new
383 Ratings
7.90
This game has not been reviewed. Be the first to review it!

8.00
Becky Cunningham—Nov 30, 2016
Final Fantasy XV is imperfect, but the high points of this journey outweigh the messy bits. I recommend you learn to go with the flow, spend some time with your bros, and really get lost in the game. Don't try too hard to be a completionist, but don't forsake the open-world adventures and cling too much to the main storyline. It's in the balance between the two that this tale is at its absolute best.
open_in_newRead full review

9.00
Robert Lashley—Dec 08, 2016
The magic of the franchise is still there and I emotionally connected with this game the same now as I did with some of the other great entries at different points through my life. I may have ended up skipping a few along the way but XV definitely brought the allure and luster back. This really is a Final Fantasy for both new and old hats to the franchise alike.
open_in_newRead full review

8.00
Alex Donaldson—Nov 28, 2016
When FF creator Hironobu Sakaguchi was trotted out on stage at the FF15 'Uncovered' event I rolled my eyes, but I now understand what he meant. Final Fantasy XV brings back some of what made FF special to begin with - it's bold and brave, throwing caution to the wind to try to make a statement about what big budget Japanese RPGs can be going forwards. It's rough around the edges, but that's okay: where it counts, it's got plenty of heart.
open_in_newRead full review
See all critic reviewsarrow_forward