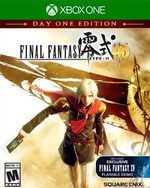 The year 842 is the beginning of the end. In an act of unprovoked aggression, the Militesi Empire invaded the Dominion of Rubrum. Imperial dreadnoughts swarmed the skies, assailing the unsuspecting countryside under the banner of the White Tiger. From amidst the flames of the besieged dominion, the Vermilion Bird rose in defiance, her crystal granting magic and mighty eidolons that her disciples might cast out the technologically advanced aggressors.

Thrust into the tumult of war, the fate of the world and its four crystals now rests on the shoulders of fourteen brave, young warriors.

Gamestop
61 Ratings
7.40
This game has not been reviewed. Be the first to review it!

8.50
Judi Azmand—Mar 19, 2015
With a darker tone and war themed setting, Type-0 shows a dreadful and horrifying side of the world, but also the hidden beauty within it. Aside from the wonky camera, the battles are fast-paced and rewarding that makes the game stand out amongst other Final Fantasy titles giving a unique experience. Whether you’re a Final Fantasy fan or just in need of some action-packed battles, check out Final Fantasy Type-0 HD.
open_in_newRead full review

8.00
Mike Splechta—Mar 16, 2015
It's a game I envied Japan of having for so long, and now I'm thankful to see that the envy was justified. ...Frustrating game systems that didn't seem to get polished when making the transition to HD are annoying, but the overall game, story and mission gameplay still make for an extremely compelling game.
open_in_newRead full review

8.00
William Murphy—Mar 16, 2015
With a wide range of characters to play, each with their own styles and skills, a deep and mysterious narrative to go through, and very fun combat at its core Final Fantasy Type-0 HD is a great way to pass the time between now and when FFXV drops later this year. It may not have all the visual upgrades one would hope for on the new gen of consoles.... The ending most certainly leaves the series open for more stories in the world.
open_in_newRead full review
See all critic reviewsarrow_forward