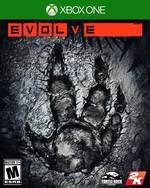 Evolve is set on Shear, a distant planet located in the "Far Arm" of space, that humanity has traveled to in the distant future. The established colonies, considered the most valuable in this region of space, are soon attacked by malevolent alien Monsters. As the Monsters slaughter the colonists on Shear, a former planet tamer named William Cabot is brought out of retirement to deal with the threat, in order to evacuate the remaining colonists from Shear. In response, Cabot assembles a team of Hunters—consisting of war veterans, psychopaths, professionals, and expendables—to eliminate the Monsters, setting the main conflict of Evolve.

8.50
Ken McKown—Feb 17, 2015
My only concern is fatigue setting in with some players, and the base dwindling. This will kill the game, as playing solo is simply not the route to go. Still, with a healthy amount of content and maps planned I can hope the support continues for months to come. Now if you’ll excuse me, I need to get back to the hunt.
open_in_newRead full review

7.50
Matt Liebl—Feb 12, 2015
There’s definitely fun to be had when playing Evolve, but I question some of the design decisions. Because it’s a game that relies so heavily on other players, each experience will be unique despite often repeating the same modes and locales. Your enjoyment in Evolve, for better or worse, will greatly revolve around the players you’re matched with.
open_in_newRead full review

7.00
David Meikleham—Feb 12, 2015
Fun, if overly frantic, Evolve is a genuinely unique online offering. Its intriguing ideas don't always pay off, and content-wise the game is a little bare bones, but hey, monsters! Evolve is currently a smidge schizophrenic. Sometimes you play a match and the game's clever systems all coalesce beautifully; creating a charmingly hectic hybrid that occasionally channels Left 4 Dead's frantically back and forth antics while handling like a monstrous Titanfall.
open_in_newRead full review
See all critic reviewsarrow_forward