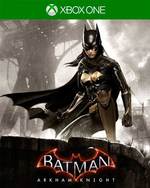 This game requires the base game Batman: Arkham Knight to play.

Set before the events of Arkham Asylum, ‘A Matter of Family’ allows players to take on the role of Batgirl as you team up with Robin to save your father - Commissioner Gordon - from a lunatic’s trap. In an abandoned amusement park on the shores of Gotham, Batgirl and Robin must fight against the odds to save Barbara’s father and avoid falling victim to the Joker’s sinister plan. Trained by Batman, Batgirl combines devastating combat with unparalleled hacking abilities to take down enemies, control objects and solve puzzles. Explore the eerie Seagate Amusement Park in this action-packed adventure which culminates in the ultimate showdown between the good, the bad, and the clinically insane.

Game Faqs open_in_new
22 Ratings
8.04
This game has not been reviewed. Be the first to review it!

6.00
Jordan Biazzo—Jul 21, 2015
For season pass holders this game should be a bust. For $40, the first add on story DLC length simply doesn’t match the price tag their asking for. Here's hoping that the next DLC, Season of Infamy, makes up for this disappointly short experience. Alternatively, for $7.00 it's easy to look over its length and technical issues, I just wished they gave Batgirl the care they do for Batman and this game could have been amazing.
open_in_newRead full review

6.30
Dan Stapleton—Jul 14, 2015
Batgirl: A Matter of Family has a decent story, an impressive setting, and some respectable brawls and Predator fights, but it’s all so disappointingly brief and self-contained. There’s nothing meaningful to do after this roughly one-hour story chunk is complete except to roam the small area beating on respawning thugs for no reason. There’s just not enough here to get excited about.
open_in_newRead full review

6.50
Chris Carter—Jul 14, 2015
Warner Bros. is really employing an odd strategy with Batman: Arkham Knight's post-launch content and the relatively expensive $40 Season Pass. All that's been revealed so far beyond a bunch of throwaway content (skins, races) is a handful of bite-sized episodes such as this; it's a far cry from the competent Cold, Cold Heart add-on for Arkham Origins last year. While A Matter of Family may be worth it for hardcore Batgirl fans, WB will have to do a lot better than this to justify the cost of the pass.
open_in_newRead full review
See all critic reviewsarrow_forward