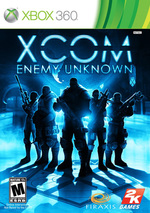 Threatened by an unknown enemy, the Earth’s governments unite to form a secret paramilitary organization, known as XCOM, to combat this extraterrestrial attack. As the commander of XCOM, you control the global defense team in a battle against a terrifying alien invasion. Control the fate of the human race by creating and managing a fully operational base, researching alien technologies, planning combat missions, and controlling soldier movement in battle.

3D Juegos open_in_new
9 Ratings
9.00
This game has not been reviewed. Be the first to review it!

8.00
Josh Wirtanen—Oct 10, 2012
As far as aesthetic, Enemy Unknown has a couple weird things going on. While the battlefields look great, displaying an obvious attention to detail, the cutscenes will leave you unimpressed. There are choppy animations, awkward facial movements, poor character models, and flat textures. Additionally, there are times in combat when the camera will zoom in to highlight a specific moment, and these moments are quite often awkward.
open_in_newRead full review

10.0
William Schwartz—Oct 09, 2012
It’s a better looking game than what is usually expected from within the genre, even if it is a bit flat on consoles. Combat and controls are intuitive, right down to the menu systems that control it all behind the scenes. XCOM: Enemy Unknown is another well crafted strategy title from Sid Meier and Firaxis Games, but if you were expecting anything different, you haven’t been paying attention to the last decade or so.
open_in_newRead full review

8.20
Steve Butts—Oct 08, 2012
XCOM is a great addition to the strategy genre, complete with an engaging campaign full of tension and challenges. The characters grow in satisfying ways, but the tactical game doesn't ever quite give players enough room to make the most of their abilities.
open_in_newRead full review
See all critic reviewsarrow_forward