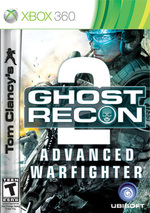 Tom Clancy's Ghost Recon Advanced Warfighter 2 builds off of the events in the first game and places gamers in control of the U.S. military's elite fighting unit, the Ghosts. In the year 2014, the rising conflict between Mexican loyalists and insurgent rebel forces has thrown Mexico into full-scale civil war. Under the command of Captain Scott Mitchell, the Ghosts are called upon to face an imminent threat to the United States. The fate of two countries now lies in the hands of the Ghosts as they fend off an attack on U.S. soil.

9.00
Charlie Barratt—Mar 08, 2007
Now it's less than a year later and we already have a sequel. With such a short development window, can the GRAW franchise possibly revolutionize the genre and the console again? No... not exactly. But while GRAW 2 does not break any fresh ground, it provides so many satisfying improvements that the experience is actually more engaging and exciting than the first one. This is an absolutely fantastic follow-up.
Read full review

9.00
Tom Orry—Mar 16, 2007
GRAW 2 is unquestionably a huge success. A short campaign aside, it does everything GRAW fans would want from a sequel and once again confirms Ubisoft as one of the leading next-gen publishers. Yearly releases are often looked down upon as the work of cash-hungry publishers, but somehow GRAW 2 has proved that to be completely wrong. Who knows what Ubisoft has in store for the future, but the GRAW series is almost guaranteed to be remembered as one of the best the 360 had to offer.
Read full review

9.20
Game Trailers—Mar 08, 2007
While the increased emphasis on scouting and recon give it a different flavor from the first game, it's also eerily similar. When you're talking about one of the best shooters on the market, that's a good thing. The learning curve is steep and the squad AI could stand a few classes, but the truth is you won't find a more realistic, feature-filled shooter. Toss in a nice bump in visuals and you'll get your money's worth and then some from Ghost Recon Advanced Warfighter 2, and enjoy every minute of it.
See all critic reviews