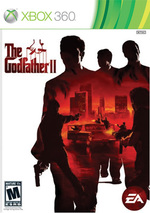 After being promoted by Michael Corleone to Don of New York, players expand to new cities, as they build up their families through extorting businesses, monopolizing illegal crime rings and defeating new families in an effort to become the most powerful mob family in America. To help players manage their empire, The Godfather II introduces "The Don's View" -- an innovative strategy meta-game that allows players to oversee the entire world as they grow the family business. Using the Don's View, players will be able to build, defend and expand their crime rings, while keeping an eye on the movements and plans of the rival families.

The Godfather: The Game

3D Juegos
23 Ratings
7.90
This game has not been reviewed. Be the first to review it!

4.50
Justin Calvert—Apr 07, 2009
Even looking past these anomalies, all you're going to find is repetitive, unsatisfying gameplay in an illogical, inconsistent world. The Godfather II should have been an offer impossible to refuse, but like Michael's brother Fredo, this one will break your heart.
Read full review

7.80
Jonathan Marx—Apr 07, 2009
The Godfather II is a solid effort from EA Redwood Shores, but it doesn't truly live up to its potential. When all is said and done, it is a good game that players will both enjoy and find tedious. Hopefully, the franchise will progress with a third iteration, as sticking to a more complex, strategic-based formula would do wonders for the series. As it stands now, you'll have fun but wish for a whole lot more!
Read full review

7.00
Neon Kelly—Apr 07, 2009
In short doses Godfather II can be an absolute hoot, but sadly its shortcomings become more and more obvious the longer you spend with it.
Read full review
See all critic reviews