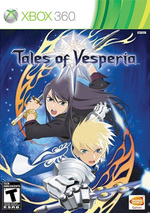 A power struggle begins in a civilization dependant on an ancient technology, the blastia, and the Empire that controls it. The fates of two friends traveling separate paths intertwine in an epic adventure that threatens the existence of all. Tales of Vesperia marks the first Tales RPG release in high-def with detail and graphics never before seen in the series. Now, real-time battles are more exciting than ever with over limits, the ability to unleash fatal strikes, combinations and burst artes. The next evolution of the revered role-playing series comes to the Xbox 360.

8.50
Kevin VanOrd—Aug 26, 2008
At its core, Tales of Vesperia isn't very different from its predecessors, but it's easily the best game in the series thanks to its great cast of characters and clever balance of storytelling and gameplay. It's beautiful, it's engaging, and it's fun, and while it won't challenge your combat prowess, it will challenge what you should expect from a modern RPG. This is, by any standard, the best recent example of how an aging series can be updated for contemporary consoles while still delivering what fans expect.
open_in_newRead full review

8.20
Ryan Geddes—Sep 22, 2008
Tales of Vesperia is a strong anime-style Japanese RPG with a wide- ranging story, compelling characters and an intense real-time battle system that keeps you on your toes. Although it has a somewhat inconsistent visual style and is relatively low on graphical details, the character designs and animations are very good, and there's a ton to explore in the world. The storyline isn't breaking any new ground and begins to unravel somewhat at the end, but there's power here, and the characters will definitely stay with you after the battle ends.
open_in_newRead full review

8.80
Game Trailers—Sep 08, 2008
Vesperia features rich characters, a well-balanced, deep combat system, and impressive presentation. In fact, it’s hard to find many faults with it. What holds it back from being a must-own is that it’s all too similar to past games in the series. We simply have a hard time telling someone to buy Vesperia over, say, Tales of Symphonia, which can be had on the cheap. Sure the graphics are improved and there are tweaks to the combat, but the overall experience feels basically the same.
See all critic reviewsarrow_forward

Dark Souls: Artorias of the Abyss