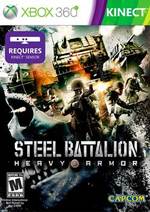 Set in 2082, Steel Battalion Heavy Armor depicts a world devoid of semiconductors, where war is waged with rudimentary weapons as new superpowers struggle for dominance. In a twist of fate, the U.S. army has been forced to begin major landing operations on what was once its own soil. In this low-tech era, there is one weapon class that will determine the course of the war -- the Vertical Tank (VT). Playing as pilot Lt. Powers, players control one such VT as he embarks on a mission that will see the action shift from North America to battlefields and war-torn streets across the globe.

3D Juegos
4 Ratings
7.60
This game has not been reviewed. Be the first to review it!

4.40
Game Trailers—Jun 26, 2012
When it works, it definitely accomplishes this goal, making you feel you're an integral part of the action. The problem is it doesn't work consistently, effectively shattering the sense of immersion each time you reach out and hit the wrong lever or button and then comically try to undo what you just did. There's a potentially entertaining game here, but it's buried underneath the Kinect's infuriating limitations.

1.00
Alex Rubens—Jun 25, 2012
As it is now, Steel Battalion: Heavy Armor is completely broken and is so fundamentally flawed that it astounds me that it could have shipped like this in the first place. If something doesn’t work once or twice, that’s completely understandable, but that doesn’t hold true when it’s the other way around and things are only working correctly once out of every dozen attempts. That’s not a finished product.
Read full review

1.00
Justin McElroy—Jun 19, 2012
No matter how I altered my lighting or called in feng shui experts to help me redistribute my living room's chi, I was never able to shake the feeling of watching through a window while someone else played Steel Battalion: Heavy Armor as I shouted suggestions and waved frantically, hoping they'd notice me. So, how is Steel Battalion: Heavy Armor as a game? I honestly have no clue.
Read full review
See all critic reviews