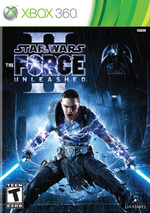 Explore more of the hidden shadows of the Sith with this sequel to the hit game Star Wars: The Force Unleashed. Starkiller, Darth Vader's apprentice, returns with over-the-top Force powers and embarks on a journey to discover his own identity and to reunite with his one true love, Juno Eclipse. In Star Wars: The Force Unleashed II, Starkiller is once again the pawn of Darth Vader -- but instead of training his protégée as a ruthless assassin, the dark lord is attempting to clone his former apprentice in an attempt to create the Ultimate Sith warrior. The chase is on -- Starkiller is in pursuit of Juno and Darth Vader is hunting for Starkiller.

3D Juegos open_in_new
38 Ratings
7.70
This game has not been reviewed. Be the first to review it!

8.00
Matthew Keast—Oct 26, 2010
Star Wars: The Force Unleashed II takes nearly every complaint we had about the original and fixes it or gives us something better.
open_in_newRead full review

6.00
Alexander Sliwinski—Oct 26, 2010
Anyone looking to turn off their brain for several hours and spam some buttons as a ridiculously powerful Force user will do fine. Those who respected the first game for its story, or are looking for quality presentation, combat variety and the feeling like they didn't just get two-thirds of a full-priced product can find better games now in a galaxy much, much closer.

6.00
Kevin VanOrd—Oct 26, 2010
Star Wars: The Force Unleashed II has many of the same qualities of its predecessor, but it doesn't really improve on them, and in many ways, it's not as good. That's unfortunate because the core combat is fun. It's a thrill to fling your foes into dangerous Force fields and to zap jumptroopers with lightning and watch them uncontrollably zip around.
open_in_newRead full review
See all critic reviewsarrow_forward