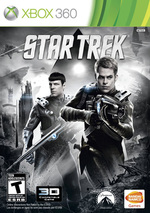 The award-winning Star Trek game casts players for the first time ever as Kirk and Spock in a totally original co-op experience worthy of gamers and fans. Set in the new canon of director and producer J.J. Abrams’ Star Trek (2009) reboot, players will be immersed in the game’s rich story and action-packed combat. Under development by acclaimed Ontario-based developers Digital Extremes (Bioshock 2, Dark Sector, The Darkness 2), Star Trek features an original story by BAFTA award winner and God of War writer, Marianne Krawczyk, in collaboration with the writer/producers of the new Star Trek films, Bob Orci, Alex Kurtzman and Damon Lindelof.

Gamestop
30 Ratings
7.00
This game has not been reviewed. Be the first to review it!

4.00
Daniel Bischoff—Apr 29, 2013
The AI makes first-class Starfleet officers into red shirts and adding a second player only serves to give the game ample opportunity to break itself. Trust me when I say you'll have more fun testing a phaser set to stun on yourself.
Read full review

3.50
Alyssa Harrison—May 26, 2013
It could make a decent rental if you’re looking for a game to play with a friend who doesn’t game much and won’t understand how bad it is, but personally I’d rather spend the time and money just watching the movies or reading Kirspock fan-fiction. Star Trek: The Video Game is definitely not worth the price of admission; spend the money and take a friend to see Star Trek Into Darkness in IMAX 3D instead.
Read full review

4.00
Ian Bonds—Apr 30, 2013
Oddly, it has nothing to do with the plot of the upcoming film, so why it was rushed to coincide only proves it was made merely to cash-in on the popularity right at the film's release. With as many mechanics that it borrows from other titles, and how poorly it implements them, it should be beamed directly into the trash compactor. Sloppy, glitchy controls and graphics, tedious gameplay, and spotty co-op makes for one adventure you'll wish would boldly go away.
Read full review
See all critic reviews