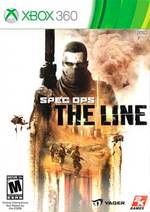 3D Juegos open_in_new
47 Ratings
8.70
This game has not been reviewed. Be the first to review it!

7.75
Matt Bertz—Jun 26, 2012
Spec Ops makes an admirable attempt to inject morality into a standard shooter experience. The narrative unravels at the end and the controls are subpar compared to the top-tier competitors, but the journey into madness is unlike anything I’ve played before.
open_in_newRead full review

8.30
Game Trailers—Jun 26, 2012
Spec Ops: The Line successfully manages fairly high marks in regard to production values and playability, and also attempts to tie some meaning to its polished and enjoyable kill-or-be-killed gameplay. It’s kind of like having some philosophical chewing gum to go with your war. You feel like there’s something to think about, but it’s not going to bother you as you go about your business.

8.00
Kirby Yablonski—Jun 26, 2012
At the end of the day I enjoyed my time with Spec Ops: The Line, as it is a fairly good game. The story managed to keep me involved, the choices I had to make made me question why I made them (yes, I know they are not real choices people), and the production values, such as the visuals and sound, were solid.
open_in_newRead full review
See all critic reviewsarrow_forward