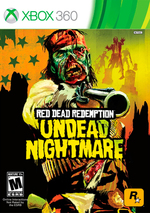 This game requires the base game Red Dead Redemption to play.

Unleashed upon the world of Red Dead Redemption, the Undead Nightmare Pack features an entirely new single-player campaign that follows John Marston as he tries to find a cure for the highly-infectious undead plague spreading across the frontier. In addition to this epic single-player adventure, the Undead Nightmare Pack also features a brand new multiplayer mode in addition to new gameplay mechanics, weapons, undead animals and mythical creatures.

Gamestop
2 Ratings
4.50
This game has not been reviewed. Be the first to review it!

9.40
Matt Walker—Oct 26, 2010
I think it is well worth the price tag. Offering a new element to Red Dead Redemption, one of this year's best titles, Undead Nightmare refreshes everyone's mind on the title right during award season. Plus, did I mention there are ZOMBIES and BIGFOOT?! In a time when every DLC seems to scream online multiplayer, it is refreshing to see the importance of the single-player experience is not forgotten.
Read full review

8.00
Dan Ryckert—Oct 26, 2010
While some of the missions seem uninspired, the fun of Red Dead Redemption is still there. Its colorful characters and fantastic cutscenes are as good as ever, with a wicked sense of humor this time around. Clearing towns and fetching items becomes tedious, but it’s still a blast to pop into Dead Eye and take the heads off six zombies in one lightning-quick flurry.

9.00
Neon Kelly—Oct 27, 2010
There's a huge amount of content here, and while I rushed through it in about six hours, it'll take you far longer than that to see and do everything. This is a gold standard expansion, one that's briefer than the GTA IV add-ons, but otherwise just as good. In a happier world, all DLC would give you this much to play with.
Read full review
See all critic reviews