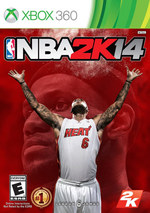 NBA 2K14 marks the return of the world's biggest and best NBA video game franchise. Following more than 38 Sports Game of the Year and "Best Of" mentions last year, 2K14 is set to rule the virtual hardwood once again. This year, 2K joins forces with the league's most dominant force: LeBron James. With a soundtrack hand-picked by the King, refined controls featuring the new Pro Stick™, the return of Crews, new Signature Skills, enhanced defense including blocked dunks, and more, NBA 2K14 will raise the bar yet again.

3D Juegos open_in_new
5 Ratings
8.60
This game has not been reviewed. Be the first to review it!

8.50
Matt Bertz—Oct 01, 2013
Like the superstar who graces its cover, NBA 2K14 features an undeniable sense of greatness. Its presentation is the best the sports genre has to offer, and the gameplay refinements improve an already stellar game. It's a shame Visual Concepts didn't put the same level of effort into improving the popular My Career or Association mode.
open_in_newRead full review

8.00
Andry Hartup—Nov 14, 2013
Overall, NBA 2K14 on next-gen is ambitious, but flawed. While the majority of the on-court improvements are brilliant, they’re let down by certain aspects of the presentation that either feel old or imperfectly implemented. Don’t misunderstand: this is absolutely the best version of NBA 2K14, but despite the big visual and storytelling improvements, the game has brought plenty of baggage with it from current-gen.
open_in_newRead full review

8.00
Devin Charles—Oct 09, 2013
Jumping right back in the flow of NBA 2K shouldn’t be a problem for past fans of the series. There are plenty of new moves and plays to delve into, though new players may have some time getting used to controls, as the way the game moves can be somewhat of an acquired taste. Without any sort of current competition, NBA 2K14 offers what it does, and we have to take it.
open_in_newRead full review
See all critic reviewsarrow_forward

Sesame Street: Once Upon a Monster