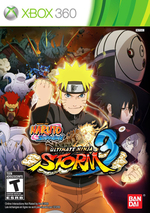 NARUTO SHIPPUDEN™: Ultimate Ninja® STORM 3 unleashes a tornado of electrifying ninja action and adventure along with 80+ playable characters, advanced online modes and enhanced fighting mechanics. In story mode, players will be thrown into a series of thrilling adventures as they delve into the Fourth Great Ninja War. For the first time in Ultimate Ninja STORM history, players will be able to relive the most exciting series of the NARUTO SHIPPUDEN anime. Experience new one-versus-many action stages to test players’ ninja skills, while epic fights will be punctuated with cinematic boss battles ranging from nefarious villains to massive beasts. Players will also be able to battle against the world through extensive multiplayer modes.

5.50
Carolyn Petit—Mar 05, 2013
It becomes routine and predictable quickly, and the prospect of unlocking more titles and images for your ninja info card (a profile that is made visible to and traded with your opponents) isn't a compelling reason to soldier on. This game is only for those who care to see Naruto's story continue to play out, and though it has its moments, it doesn't deliver quite the level of excitement you'd hope for from a game bearing the Naruto Shippuden name.
open_in_newRead full review

5.30
Michael Damiani—Mar 05, 2013
Ultimate Ninja Storm 3 starts strong and has a few inspired moments, but it can’t keep up its momentum and plods through most of its material, too often asking you to watch rather than play. The memorable battles and cinematic quicktime sequences you can’t find anywhere else are in short supply here, and as it stands, only the staunchest Naruto fans will make it through this latest and most tiring pilgrimage.

6.00
Bill Hess—Mar 07, 2013
Progress between previous games and Naruto Shippuden: Ultimate Ninja Storm 3 is measured in inches and not in yards. Fans with allegiance to the Naruto franchise already, will find that this is probably the best game in the series, if only a slight iteration from previous games.
open_in_newRead full review
See all critic reviewsarrow_forward