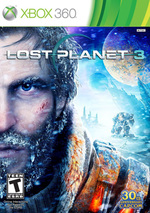 Lost Planet 3 is a combination Third and First-person Shooter, that is the 2013 prequel to the entire Lost Planet game franchise. The extreme and unpredictable conditions that characterized the Lost Planet series return, harsher than ever before as new truths about the foreboding planet and the colonial history of E.D.N. III are revealed. Game features include a new protagonist, a variety of player perspectives, ever-changing weather, tactical combat against Akrid enemies, and multiplayer support.

3D Juegos
5 Ratings
8.00
This game has not been reviewed. Be the first to review it!

7.00
Arthur Gies—Aug 27, 2013
Spark Unlimited has made a game that is both more and less than the sum of its parts â but thereâs enough ambition there to see what Lost Planet 3 could have been. It went beyond predictable third-person shooter conceits often enough to make me glad I explored it, even if I wondered where the "could have beens" would have gone.
Read full review

6.20
Dan Stapleton—Aug 27, 2013
Lost Planet 3 at least has a respectable story and some combat variety to it, even if the pieces don’t always come together quite right. Jumping in and out of the mech keeps it from being just another cover-based shooter. If not for level design that’s full of frustrating inconsistencies, it might even have been good enough to fully recommend.
Read full review