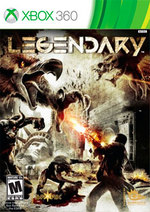 Legendary tells the story of Charles Deckard, an art thief who is duped into stealing Pandora's Box. When he opens the box, he releases hordes of beasts thought to be fictional -- werewolves and gryphons and all means of beast and demon -- into an unprepared modern world. A full scale war between man and myth begins, and it is quickly complicated by the actions of powerful secret societies. As the person responsible for releasing this terror, Deckard's unwittingly become the only person capable of containing it once more and saving civilization from being destroyed by the terrifying creatures of the box.

3D Juegos open_in_new
15 Ratings
6.80
This game has not been reviewed. Be the first to review it!

5.00
Adam Brown—Nov 04, 2008
While the gameplay found in Legendary is incredibly sloppy and repetitive, the game does get some things right. Boss battles such as the ones with the kraken and the junk golem are epic in scale and quite entertaining. Numerous scripted events add to the cinematic feel of the game and also serve to keep you alert at all times. However, neither of these things can make up for the game's fairly lame story, repetitive and annoying combat...
open_in_newRead full review

3.50
Kevin VanOrd—Nov 10, 2008
Perhaps the most fascinating aspect of Legendary is that it prepares you for a sequel, which in this case is less of a tantalizing tease than it is a full-on threat. Memorably, the game's lead designer apologizes in one of the Xbox Live achievement descriptions for giving another achievement such a cheesy name. Unfortunately, a game as bad as this one calls for more than just one apology.
open_in_newRead full review

5.00
Total Xbox—Oct 25, 2008
Despite the ambitious name, Legendary fails to stand toe to toe with the big hitters in this month's review section. But don't completely strike it from your queue of games to pick up this winter.
See all critic reviewsarrow_forward