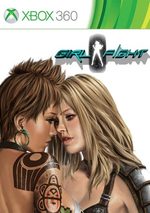 Follow the journey of eight fierce females with psychic powers who battle each other within a secret government research facility! Fight using both hand-to-hand combat and supernatural psychic attacks in a wide variety of doomsday scenarios! Perform awesome moves in battle to earn virtual currency to unlock extra content, such as new psychic abilities, alternate costumes, in-depth backstory, and sexy illustrations of the girls! Psychic warfare starts here!

Game Faqs open_in_new
9 Ratings
5.78
This game has not been reviewed. Be the first to review it!

3.00
Anthony Bacchus—Oct 11, 2013
Girl Fight simply can't be recommended at all, not even for the price tag. There is a serious lack of engagement here and very little reason to keep playing. The Psi-Amp power-ups are a nice addition but it's novelty fades into repetitiveness far too quickly, even in versus mode with a friend. Overall though, Girl Fight just isn't fun to play for its single-player and online multiplayer. Instead, Girl Fight is a Dead or Alive copycat that will only make you wish you were playing Dead or Alive.

3.50
Heidi Kemps—Oct 18, 2013
For a game that plays up its characters’ sex appeal, Girl Fight is stupefyingly unattractive.

3.00
Mathias Holmberg—Oct 17, 2013
Girl Fight has a few interesting ideas that could have been the foundation of something great. Unfortunately the rest of the game has been poorly cloned from existing fighting titles without any polish or character of its own. There are many, much better fighting games on the market in all price classes. And if you're into watching girls fight, there are also way better options out there for that too.
open_in_newRead full review
See all critic reviewsarrow_forward

Cloudy with a Chance of Meatballs