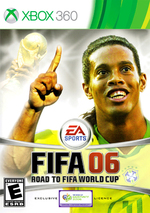 EA celebrates its new exclusive FIFA World Cup interactive entertainment partnership with the release of FIFA 06, a game that immerses players into the emotional intensity of the next-generation football. Utilizing the power of the Xbox 360, fans are able to revel in the world' most sophisticated representation of football ever. Experience a newly enhanced gameplay engine that delivers extremely responsive controls and greater level of depth. New physics and animations mean that players will now react more realistically to every tackle, shot or pass of the ball.

Gamestop
7 Ratings
7.10
This game has not been reviewed. Be the first to review it!

7.60
Justin Calvert—Nov 21, 2005
At the end of the day, FIFA 06: Road to FIFA World Cup plays a passable game of soccer and is definitely fun when played against the right human opposition. There's not a lot of single-player content here, though, and the fact that the game is inferior to this year's PlayStation 2 and Xbox games in so many ways makes it nigh on impossible to recommend.
Read full review

6.90
Jonathan Miller—Nov 16, 2005
The gameplay is good old FIFA at heart and, while more difficult, is still enjoyable and simple. While EA provides a decent, yet very shallow, base for its first next-generation soccer title, it's evident the team over at EA Canada could have done a lot more. As such, we will be eagerly awaiting FIFA 07.
Read full review

2.00
Tom Bramwell—Nov 28, 2005
In a sense, it's not only awful, but it's also sabotaging everybody else's efforts at the same time. As a game, it's not much better. I like football, I like football games; I find it hard to recognise this in either category.
Read full review
See all critic reviews