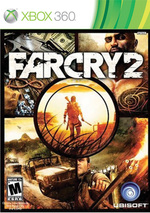 Far Cry® 2 is a true open-world FPS where every decision you make affects the outcome of the game. The first sequel to the award-winning franchise takes you to one of the most beautiful and hostile environments in the world - AFRICA. You are a gun for hire, trapped in a war-torn African state, stricken with malaria and forced to make deals with corrupt warlords. Your mission is to hunt down and kill The Jackal. This evil arms dealer has been perpetuating this conflict for years, wreaking havoc on the land an all of its innocent people. Run, swim, drive, fly, shoot, fight and smash your way through over 50km² of open world. Beware though, sometimes the hunter can become the hunted.

XGN open_in_new
65 Ratings
8.80
This game has not been reviewed. Be the first to review it!

8.70
Game Trailers—Oct 31, 2008
Far Cry 2 is a ruggedly good-looking game with an ambitious design and a cutthroat feel. The action is high-quality, free-roaming stuff, and the game earns major points for its smart way of dealing with getting shot up, patched up, and bailed out. The story does keep you on a leash and your objectives tend to repeat without too much variation, but if you enjoy this line of work, Far Cry 2's dangerous African landscape is a great place to be a merc

8.00
Brad Nicholson—Nov 03, 2008
Far Cry 2 is a great game that does everything a first-person shooter should. It has a great presentation, good shooting mechanics, decent AI, a long single player experience, impactful choices, an enormous multiplayer component, and some of the more memorable injury scenes ever witnessed in a videogame. The pitfalls come with the redundancy of some missions, the sparsely populated world, and awkward saving system that can often throw players miles away from objectives with nothing but a long, pointless drive to look forward to.
open_in_newRead full review

8.00
Brad Shoemaker—Nov 03, 2008
Besides, the dense, lengthy single-player experience is the real focus here and is worth the price of admission alone. You can easily spend 20 or more hours solely on the story, notwithstanding all the side missions available from weapons vendors, buddies, cell towers, and so on. There's a lot to do in Far Cry 2, and if you can get a good handle on the quirks of the almost constant combat scenarios you'll run into, the weapons variety, stunning visuals, and originality of the story and setting make for a well-rounded and satisfying shooter.
open_in_newRead full review
See all critic reviewsarrow_forward