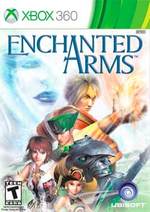 The Xbox 360's first Japanese RPG places you in the control of Atsuma, who early in his adventure manages to inadvertently open a seal which revives the fierce Devil Golem. You'll make use of Golem support characters as you work through the game's strategic battle system. The game has over 100 Golems which can be assembled using ingredient items. Characters can be customized using the "SP" experience points that you gain in battle. As the story develops, players face increasingly difficult challenges and learn to master Atsuma's special fighting and magical abilities.

Gamestop
37 Ratings
7.40
This game has not been reviewed. Be the first to review it!

7.00
Game Trailers—Jun 07, 2007
Enchanted Arms is the best Japanese RPG on next-gen consoles, but that’s because it’s the only one. The colorful adventure is typical in just about every imaginable way, and while the battle system has a hint of originality, it’s all blown to bits by the random nature of the grid system.

7.60
Erik Brudvig—Aug 30, 2006
Enchanted Arms is quite good for a first attempt at a 360 traditional RPG. You won't find anything exceptional here, nor will you find anything new. If you're looking for a solid, turn-based RPG, then you could do far worse than Enchanted Arms. The good options for auto fighting, fast forwarding through battles and scores of golems to hunt are brought down by several unfortunate shortcomings.
Read full review

7.00
Greg Vallentin—Sep 18, 2006
The biggest disappoint is how pitiful the narrative is. If anything, the story should be at the front lines of every RPG, but unfortunately these days, that's not the case. If you can get around its archetypal characters and unoriginal, yet functional, mechanics, Enchanted Arms can make a nice addition to your JRPG-less Xbox 360 library.
Read full review
See all critic reviews