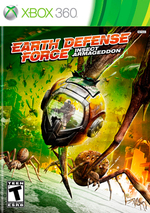 The bugs are back in Earth Defense Force: Insect Armageddon, and its no picnic for the world's elite soldiers as the most concentrated giant insect invasion ever threatens human civilization unless the Earth Defense Force (EDF) can stop them! New Detroit's giant bug problem is unavoidable, and mankind's last hope lies with the Earth Defense Force to defend the world from the insect swarm, even if it means blowing up the entire city as part of the extermination process.

Jeuxvideo.com open_in_new
17 Ratings
7.35
This game has not been reviewed. Be the first to review it!

8.00
Joe Juba—Jul 05, 2011
Insect Armageddon lacks the clueless earnestness of the last entry and carries over some dated concepts, but it fully captures the same breed of unapologetic run-and-gun action. Ultimately, that’s what kept me playing EDF 2017 for dozens of hours, and that’s why I’ve got dozens more in front of me with Insect Armageddon
open_in_newRead full review

6.00
Angelo M. D'Argenio—Jul 05, 2011
I'm honestly astounded as to how any game can be so good and so bad at the same time. Earth Defense Force: Insect Armageddon is mindless and dumb any way you look at it, but I just can't stop playing. I feel like that one guy in the back of every Michael Bay movie that's laughing hysterically while everyone else is putting their face in their hands and groaning
open_in_newRead full review

4.00
Justin McElroy—Jul 07, 2011
This is normally the part of the review where I'd say "But if you just want to shut your brain off and shoot some bugs, then -- blah, blah, blah" but it would just be too insulting in this case. Even the most brainless of braindead fare can aim higher than this rat-hitting-the-feeder-bar inanity. You deserve better.
See all critic reviewsarrow_forward