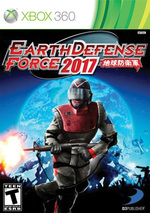 The Earth Defense Force needs you!! Planet Earth is under attack from alien invaders, and the EDF is our only chance for survival. Grab your gun, join your squad and repel the attacking forces in this action-packed, arcade-style shooter. Though the odds may seem impossible, you are not alone. Fighting by your side are your AI controlled Earth Defense Force teammates. This crew of soldiers will fearlessly charge into battle and assist you throughout the game. Join-up with a friend in co-op mode and work together to battle your way through the alien swarms. Take control of battle tanks, armored mechs, attack helicopters and hover bikes to help complete your mission across more than 50 missions.

XGN
16 Ratings
6.38
This game has not been reviewed. Be the first to review it!

7.30
Game Trailers—Mar 29, 2007
The sum of its parts doesn’t really equal anything outstanding

7.00
Tom Orry—Apr 17, 2007
Earth Defence Force 2017 is a great game. By no means should all games follow the same formula, but as a title that is about blasting giant enemies and nothing more, it fills a nice gap in the next-gen market. It lacks polish and doesn't have the best production values, but if the idea of shooting more enemies in one game than you've shot in your entire gaming history combined sounds good, look no further.
Read full review

7.10
Alex Navarro—Mar 22, 2007
It's awkward, single-minded, gross, slightly ugly, somewhat stilted, fully cheesy, and dumb with a capital D, U, and M, but Earth Defense Force 2017 somehow, some way manages to entertain. As you sit, blowing up aliens for an hour or two at a time (any longer than that, and your brain will start to rot), you'll be asking yourself why you're enjoying this so much, when there's so many clear-cut flaws all over the place.
Read full review
See all critic reviews