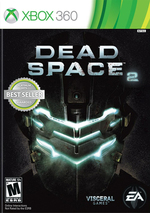 Engineer Isaac Clarke returns for another blood-curdling adventure in the sequel to the critically acclaimed Dead Space™. After waking from a coma on a massive space city known as “The Sprawl”, the lone survivor of a horrific alien infection finds himself confronting a catastrophic new nightmare. Battling dementia, hunted by the government, and haunted by visions of his dead girlfriend, Isaac will do whatever it takes to save himself and dominate the gruesome onslaught. With an arsenal of tools to dismember Necromorphs and new determination, an engineer will bring the terror to space.

XGN open_in_new
25 Ratings
8.54
This game has not been reviewed. Be the first to review it!

8.50
Susan Arendt—Feb 08, 2011
Dead Space 2 does an admirable job of keeping the action feeling fresh and taut, but the later stages of the game do start to feel a bit samey. You can only play through so many levels where you have to survive endless necromorph waves before they all feel alike. For the rest of the game, the necromorph attacks have a certain amount of context, but just standing in place and killing thing after thing after thing loses its charm after the first few times you do it.
open_in_newRead full review

8.00
Richard Mitchell—Jan 25, 2011
Dead Space 2 does not stray far from its gross, fleshy roots, but it still manages to provide one of the best action horror experiences available. In short, survival horror fans should definitely suit up.
See all critic reviewsarrow_forward