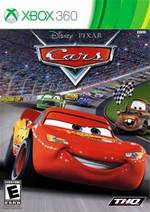 Race to the finish line as you live all the fun and excitement of the Walt Disney Pictures & Pixar Animation Studios film, "Cars." Play as all your favorite characters as you help Lightning McQueen capture the coveted Piston Cup Championship. Fans will discover unique characters and environments inspired by the film with more than 10 playable characters and 30 races and minigames to choose from. The game features a fully immersive re-creation of all major environments introduced in the movie, including Radiator Springs and Ornament Valley, which will offer distinctive racing experiences to players while maintaining the artistic style of the film.

Jeuxvideo.com open_in_new
9 Ratings
7.50
This game has not been reviewed. Be the first to review it!

7.00
Mikel Reparaz—Jan 22, 2007
Whichever version you play, Cars is a likable little racing adventure. The gameplay is nothing outstanding, but it's fun enough while it lasts, and overall it looks pretty slick. If you've seen the movie and long to explore Radiator Springs for yourself, this is worth checking out.
open_in_newRead full review

7.00
Alex Navarro—Oct 27, 2006
However, it can't quite make up for the amount of time that's passed since the older console versions of Cars came out, and the higher price tag of $49.99 at retail. If you skipped out on the game back in June, have a young Pixar fan at home, and an Xbox 360, the game is still a good one. But you might be better off grabbing one of the other versions, since the changes made here are so negligible.
open_in_newRead full review