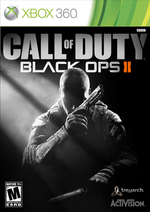 9.00
Josh Engen—Nov 13, 2012
In a lot of ways, it feels like Treyarch is giving a gigantic middle finger to Infinity Ward, the Modern Warfare developer that always seems to dominate the spotlight. Black Ops 2 isn't just the culmination of the Black Ops series, it might become the most-loved title in the Call of Duty franchise. Either way, fans won’t be disappointed this year.
open_in_newRead full review

8.00
Xav de Matos—Nov 13, 2012
Multiplayer is king in Black Ops 2, offering plenty of in-game and inherent rewards for its ravenous online community. It's paired with a lackluster story that fails the ambition shown by the branching campaign, reflecting the overall game's forward-thinking but imperfectly executed ideas. Call of Duty: Black Ops 2 isn't the best or most charming entry in the franchise, then, but it takes risks, exploring more than is strictly required for an inevitably annual franchise.
See all critic reviewsarrow_forward