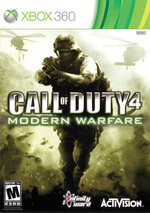 War rages on in the fourth edition of Activision's acclaimed war game. For the first time in the series, Call of Duty moves away from WWII to the modern battlefield. Armed with an arsenal of advanced and powerful modern day firepower, players are transported to treacherous hotspots around the globe to take on a rogue enemy group threatening the world. As both a U.S Marine and British S.A.S. soldier fighting through an unfolding story full of twists and turns, players use sophisticated technology, superior firepower and coordinated land and air strikes on a battlefield where speed, accuracy and communication are essential to victory. The epic title also delivers an added depth of multiplayer action providing online fans an all-new community of persistence, addictive and customizable gameplay.

9.00
Tom Orry—Nov 09, 2007
Call of Duty fans worried by the series' move to the modern age of combat can breathe a sigh of relief. Although a new setting, Call of Duty 4 is everything we've come to love about the series and continues its tradition of stunning visuals and thrilling gameplay. The single-player is short but the Arcade game mode and brilliant online multiplayer combine to create one of the games of the year. It's more of the same, but every bit as polished as we hoped it would be.
open_in_newRead full review

9.40
Hilary Goldstein—Nov 28, 2007
Call of Duty 4: Modern Warfare is a fantastic game. The single-player experience is easily Infinity Ward's best work to date. Calling it intense may be an understatement. The overall story is standard action movie fare, but the relationships built over the short five hours of play are surprisingly strong. Though the single-player lacks length, the multiplayer should keep you invested in COD4 for the long winter. This is a truly fantastic multiplayer offering that's as deep as any other online game available.
open_in_newRead full review

9.00
Jeff Gerstmann—Nov 06, 2007
It's a shame that the single-player is so brief, but you should only skip out on Call of Duty 4 if you're the sort of person who doesn't appreciate great first-person shooter multiplayer. The quality of the content in the campaign is totally top-shelf, and the multiplayer is some of the best around, making this a truly superb package.
open_in_newRead full review
See all critic reviewsarrow_forward