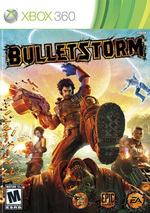 Set in a futuristic utopia, an elite peacekeeping force thwarts the rumblings of civil war. But deception within the ranks has caused two members of the most feared unit, Dead Echo, to strike out on their own. When their latest space piracy venture heads south, Grayson Hunt and Ishi Sato narrowly survive a crash landing on the abandoned paradise planet of Stygia, now stranded they find themselves surrounded by hordes of mutants and flesh eating gangs. Gray and Ishi survive on two objectives; get off the planet alive and exact revenge on the man who sent them there. Taking the role of Grayson Hunt, players wield an arsenal of over-the-top combat moves and some of the most uniquely innovative weapons ever seen in a first person shooter that all feed into Bulletstorm’s™ distinct ‘skillshot’ system; a combination that produces unprecedented levels of frantic gameplay. Unleash the Bulletstorm™!

8.00
Kevin VanOrd—Feb 22, 2011
Bulletstorm is a fun, breezy, and puerile romp. If you play games for the fun of it all, this shooter delivers, giving you some neat weapons and mechanics, and rewarding you for your topflight technique. Unspectacular online play, an abundance of shooter cliches, and forced vulgarity keep it from joining the shooter elite. But the creativity of the skillshot system paired with the engrossing nature of moving up the Echoes leaderboards gives Bulletstorm some muscle and will inspire a dedicated following of talented players eager to show off their incredible mastery of its gratifying mechanics.
open_in_newRead full review

8.00
Trevor Houston—Mar 16, 2011
Bulletstorm is the equivalent of a summer time big-screen Hollywood blockbuster. Sure it is fun and features plenty of eye candy which pushes the limits of the Xbox 360’s hardware but it lacks in depth and substance. The lack of multiplayer options, short single player mode and lack of a cooperative mode where I can play through the entire campaign from beginning to end with a friend were all significant issues for me.
open_in_newRead full review