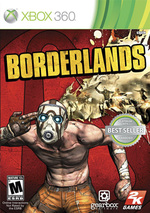 In a distant future, the planets at the outer edges of the galaxy have become a beacon to fortune seekers and those yearning for a better life off world. But there are no guarantees in deep space. Pandora, one of these distant planets, was reported to be rich in untapped mineral wealth, and so drew many hoping to get rich quick, but in the end little was found beyond the scattered ruins of a past alien civilization. With nothing to gain, any who could soon abandoned Pandora, leaving those who remained to deal with the lawlessness of a world gone bust, and the mystery of the long-dead alien civilization.

7.50
Jan 27, 2021
Addictive but mostly fluffy looting and shooting. Influential and memorable but not without some slop in the gameplay and grind in the pacing. Great sense of humor.
0
0 Comment

8.00
Tyler Wilde—Jun 24, 2012
Borderlands lacks the charm of Fallout 3, Mass Effect, or Half-Life 2, but it does offer a crap-ton of ‘roided-out bandits, effed-up dog things, giant spider demons, and screeching pterodactyl beasts to shoot with a crap-ton of guns. And that’s really what it’s about – finding weapons and shooting things with them. You have to assign a skill point now and then, and there’s kind of a story, but those things don’t matter much.
Read full review

8.00
Jeff Gerstmann—Oct 19, 2009
The structure of Borderlands makes it feel like an MMO game that doesn't require you to rely on groups of other players to enjoy. Though it's probably better when you're playing online with friends, playing alone is still perfectly fine. It's also one of those games that's so strong in parts that its shortcomings become almost glaring by comparison. As such, the game's barebones story, lackluster AI, and insufficient player trading options are real disappointments that prevent the game from reaching its full potential.
Read full review

8.00
Wesley Yin-Poole—Oct 23, 2009
Gearbox should be praised. Borderlands is unique, it's different, and it's hard to classify. But it's not for everyone. It's not for the stereotypical CoD/Halo crowd. It's not revolutionary, but it is interesting. And, crucially, it's a hell of a lot of fun, but only, long term at least, in co-op. When you're standing over the corpses of Skags, Midget Mutant Psychos and Badass Bruisers, having pounded on a heavily guarded compound with three mates, you can feel the adrenaline pumping. This, despite what they say about the guns, is what Borderlands is all about.
Read full review
See all critic reviews