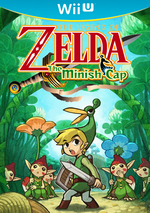 The Legend of Zelda: The Minish Cap

Jun 5, 2014
NA
playscore
To get a playcore, a minimum of 30 gamer ratings and 3 critic reviews are required.
NA
gamerscore
person
0
NA
criticscore
rate_review
2

Don the Minish Cap to shrink Link™ down for his most massively microscopic adventure ever! Mere blades of grass will tower over your head as you explore Hyrule, conquering enemies, puzzles, dungeons and bosses as you go. Along the way, you’ll wield powerful items, fuse magic Kinstones and befriend the elusive Minish to stop the evil sorcerer Vaati. The Minish Cap plays a pivotal part in the Four Swords storyline of the Legend of Zelda™ series, and is the first and only game in which Link explores the land of the Minish—a tiny, mysterious kingdom on the very surface of Hyrule.

The Legend of Zelda: A Link to the Past

0 Review
NA
This game has not been reviewed. Be the first to review it!