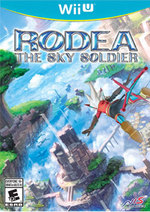 1,000 years ago, Emperor Gerardo of the Naga Empire sent an army of machine soldiers to invade the sky kingdom of Garuda. Thanks to the efforts of Princess Cecilia and Rodeo, a machine soldier who promised to protect Garuda, Emperor Gerardo's assault was thwarted. In present day, a spirited inventor named Ion discovers an abandoned robot that has fallen into disrepair in the heart of a scorching desert. Upon completing her repairs, the robot stirs to life and reveals itself to be none other than Rodeo. Stunned to find himself in the future, Rodeo learns that the Naga Empire is no more and that Garuda has known peace for 1,000 years. But this peace was not meant to last, for the forces of Naga have returned to wage war against Garuda. Remembering the promise he made 1,000 years ago, Rodeo takes to the skies to defend Garuda from the Naga Empire once again.

Amazon open_in_new
46 Ratings
6.80
This game has not been reviewed. Be the first to review it!

6.00
Dermot Creegan—Nov 04, 2015
The issues begin with the fundamental mechanics of flight and persist into its pacing, controls and stability, ultimately tainting even the most joyous moments of freedom afforded by Rodea’s affinity for the open air. There are moments of bliss that shine through the mess, but the pure celebration of flight that Prope set out to deliver on Wii has lost many of its most important features during the transition to Wii U, and in the end, Rodea the Sky Soldier fails to live up to its lofty ambitions.
open_in_newRead full review

4.00
Ray Carsillo—Nov 13, 2015
Had it released in 2011 like originally intended for the Wii, this might’ve been a much better handling game to play, and wouldn’t have looked nearly as bad as it does next to the Wii U contemporaries it now has to contend with. The saddest part, though, is that Yuji Naka doesn’t seem willing to completely let go of his past—and, if anything, accidentally makes the case for why the beloved characters and gameplay he created in his early game design days no longer fit in the modern gaming realm.

6.70
Heidi Kemps—Nov 10, 2015
The Wii U version of Rodea is simultaneously a game with a lot of charm and one that’s difficult to love as much as you want to. When Rodea works and all of its gears are cranking along smoothly, it’s an exhilarating joy to play. But everything can come crashing down at any time: an enemy encounter reliant on overly finicky aiming or a misplaced attack that sends you careening into the abyss can sour the sense of wonder in a flash.
open_in_newRead full review
See all critic reviewsarrow_forward

Adventure Time: Explore the Dungeon Because I Don't Know!