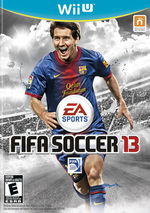 EA SPORTS delivers its best soccer game ever on a Nintendo console with award-winning gameplay—including the Player Impact Engine—HD graphics, and over 500 officially licensed clubs. Three revolutionary new ways to play bring players of all abilities together, making this the most accessible FIFA console game ever made. Families can play together in Co-op Mode, where one player manages and up to four others play. Team Management Control features interactive radar to send players on supporting runs, attacking or defensive, and touch screen control to change tactics, formations or subs on the fly.

Best Buy
3 Ratings
8.60
This game has not been reviewed. Be the first to review it!

9.00
Samit Sarkar—Sep 28, 2012
FIFA 13 is a better soccer simulation than ever, but it's about more than that. The player-on-player and player-on-ball interactions, along with the AI improvements, sell the look and feel of true human interaction on the pitch. The infusion of real-life soccer developments throughout the game makes the experience come alive; you feel like you're part of a vibrant, passionate community of soccer fans. FIFA 13's mechanics bring that human element to the fore, and its connected experiences highlight our shared global identity as participants in the enjoyment of the beautiful game.
open_in_newRead full review

6.00
Ken Barnes—Dec 03, 2012
FIFA 13 for Wii U is a fine simulation of the world's favourite sport. In footballing circles, the only game that beats it is its own sequel, which is already out for the Xbox 360 and PlayStation 3, and also happens to be called FIFA 13. The chances are that if you’re really into football games, you've been playing FIFA on one of the other home formats for a while and will have played this edition of the game to death already. If you aren't, then you’ll have no interest in FIFA 13 anyway.
open_in_newRead full review

6.00
Daniel Krupa—Nov 27, 2012
For a long time, Wii owners have had to accept diluted versions of FIFA; the graphics weren’t high definition and the gameplay didn’t have the same headline features. The Wii U should have changed all of that – this, after all, is the first of a next generation of consoles. But things haven’t moved on and the stark truth is Nintendo owners still don’t get the same experience they’d get on other consoles.
open_in_newRead full review
See all critic reviewsarrow_forward