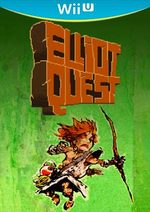 Elliot can’t die—but he’s still running out of time. In Elliot Quest, the victim of a rare curse must find a cure before he’s transformed into a demon.

After Elliot’s wife disappears, he falls sick and attempts to take his own life--only to discovers that he can’t die. Plagued by nightmares and growing weaker by the day, Elliot seeks out a local Sage, who tells him that he’s the victim of a rare curse. A demon called a Satar is slowly consuming Elliot’s vitality. If Elliot can’t find a cure to the curse before it’s too late, he will become a Satar. His only hope is to ask for the help of one of the island’s Guardians, who have kept the Satar from taking over Urele. Elliot can’t die—but he’s still running out of time.

Jeuxvideo.com open_in_new
4 Ratings
9.00
This game has not been reviewed. Be the first to review it!

8.00
Danny Saya—Apr 03, 2015
There’s no doubt that Elliot Quest is an homage to games like Zelda 2 and Castlevania, but there’s also a lot of originality here, especially in the game’s narrative.
open_in_newRead full review

8.00
Lee Meyer—Mar 23, 2015
Elliot Quest is a solid new entry to the ever-growing stable of great eShop titles. While it's not perfect - there really shouldn't be slowdown in a game with 8-bit pixel art, and it can be frustrating to try to figure out where to go next - anyone looking for a challenging, satisfying action adventure will likely get a lot of enjoyment out of it. As well as all this, Elliot Quest is a great showcase for what HTML5 can do. Just be prepared to do a lot of exploring.
open_in_newRead full review

9.00
Neal Ronaghan—Mar 19, 2015
It’s easy to get lost in Elliot Quest, which can be good and bad. I lost track of time as I enjoyed the dungeons and exploration so much, but I would too often get lost and not know how to progress. Whether you welcome that kind of challenge or not, Elliot Quest is a fine, fantastic addition to the Wii U eShop that might very well become a breakout game like Cave Story. This is a tremendous game that, if you have any affinity for aspects of Zelda II and Metroid games, is something you should be getting as soon as possible.
open_in_newRead full review
See all critic reviewsarrow_forward