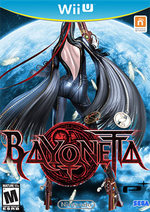 Bayonetta is a butt-kicking, havoc-wreaking witch, and she’ll shoot, whip, slice, and burn angels as she uncovers the truth about her own past. Her weapons and moves are all stylishly over-the-top, but she can also dodge attacks to slow down time, and inflict Torture Attacks on her enemies.

This is the prequel to the Bayonetta 2 game, and it’s every bit as sassy, destructive, and epic as you’d expect. Bayonetta is the fashionable and foxy unholy offspring of an Umbra Witch and a Lumen Sage, and she’s lost her memory after being asleep at the bottom of a lake for 500 years. Use Wicked Weaves to summon Infernal Demons, dodge enemies’ dangerous attacks to slow down time, and punish angels (they’re so naughty!) with deadly devices. You can even dress Bayonetta up in four Nintendo-themed costumes exclusive to Bayonetta on the Wii U—Princess Peach, Princess Daisy, Link, and Samus Aran.

3D Juegos open_in_new
11 Ratings
9.20
This game has not been reviewed. Be the first to review it!

9.30
Marc Woeckener—Nov 02, 2014
All issues aside, Bayonetta is definitely an outstanding experience that should not be passed up on the Wii U. It excels tremendously at delivering hardcore action with incredible style. If you have yet to pick up this amazing game, you should definitely get a hold of it as soon as possible.

8.00
Alex Seedhouse—Sep 18, 2014
For those feverishly anticipating the high-octane thrills of Bayonetta 2 but yet to experience the original, it’s best to ground yourself here before tackling the sequel. While not set to deliver the same impact that it did more than four years ago, Bayonetta remains just as entrancingly bewitching to newcomers as to those that fell for her seductive-style the first time around.
open_in_newRead full review

8.00
Thomas Whitehead—Sep 19, 2014
Bayonetta's distribution — as part of Bayonetta 2's release in various packages or as an eShop download — makes it a must have for action fans intent on jumping into the newer entry. ...Bayonetta has attitude, and while you may occasionally cringe at this one's mixed messages in empowering its heroine, it serves up a great deal of frenetic action — your controller of choice won't know what's hit it.
open_in_newRead full review
See all critic reviewsarrow_forward