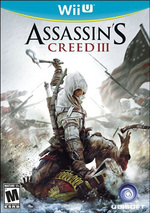 3D Juegos open_in_new
20 Ratings
8.50
This game has not been reviewed. Be the first to review it!

10.0
Jonathan Leack—Nov 24, 2012
The Wii U version of Assassin’s Creed III doesn’t endanger what has made the game a masterpiece, and adds a few neat tricks of its own. The GamePad’s map and horse calling features are useful tools that you’ll enjoy, and being able to play it away from the television can’t be understated. If you’re going to purchase Assassin’s Creed III for a console, the Wii U version is the king of the hill.
open_in_newRead full review

10.0
Steve Hannley—Nov 22, 2012
Assassin’s Creed III is a beautiful, sprawling adventure that proves to be one of the most, if not the most, ambitious titles ever created. Just when you think you have it figured out, an entirely new element is introduced that enriches it further, rendering it one of the least repetitive experiences to be had with a controller.
open_in_newRead full review

7.50
Kevin VanOrd—Nov 28, 2012
It's a shame that the Wii U version of Assassin's Creed III is so prone to bugs and performance hitches; fortunately, the joys of exploration still shine through, allowing you to get lost in the bustle of cityfolk going about their lives. Connor's story is one of unlikely alliances and broken traditions; Desmond's is one of urgent decisions and past regrets.
open_in_newRead full review
See all critic reviewsarrow_forward

Need for Speed: Most Wanted U