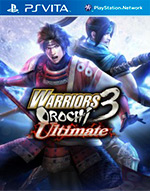 Warriors Orochi 3 Ultimate is an enhanced version of the hit action game Warriors Orochi 3, once again combining the much loved heroes of the Dynasty Warriors and Samurai Warriors series. The mythology of the Orochi universe expands with a new main storyline, which brings the heroes together again into the chaos of battle as they are summoned upon by a mysterious stone. The adventure is complemented by side stories offering over 175 scenarios and endings to uncover, including the ability to battle from the point of view of various characters and even “what if” hypothetical stages that exist in a parallel world.

Game Faqs open_in_new
79 Ratings
8.12
This game has not been reviewed. Be the first to review it!

7.60
magmar126—Sep 05, 2014
Warriors Orochi 3 Ultimate is a great game to add to your PS Vita collection. It features a story mode of around 40 hours with 178 scenarios, a total of 145 different playable characters and environments from series like Atelier, Dead Or Alive, Ninja Gaiden and Dynasty Warriors plus various modes to keep you busy. The few minor graphical errors aside, this game is great!
open_in_newRead full review

7.30
Kestutis Kalvaitis—Sep 30, 2014
Warriors Orochi 3 Ultimate offers lots of replayability with a deep roster of characters that will appeal to fans of the series, but offers little to newcomers not already invested in the Musou style of gameplay.
open_in_newRead full review

7.00
Robert Ramsey—Sep 21, 2014
If you're a Vita-only gamer, then Warriors Orochi 3 Ultimate should provide you with hours upon hours of enjoyable hack and slash content. ...Dynasty Warriors 8: Xtreme Legends Complete Edition still holds the portable Warriors crown, then, but the soul of a great PS4 musou title can still be found alive and well here.
open_in_newRead full review
See all critic reviewsarrow_forward