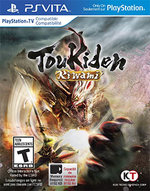 Go forth and eradicate the epic 'Oni' menace!

'Toukiden: Kiwami' is the sequel to 'TOUKIDEN,'consisting of all the content from the original title plus the addition of various elements and stories. Players take on the role of a Slayer possessing unique abilities, and alongside other Slayers, battle the Oni to save mankind from destruction. Band together to unleash the 'United Destroyer' attack and experience the ultimate Targeted Destruction System!

3D Juegos
1 Rating
9.00
This game has not been reviewed. Be the first to review it!

8.50
Mike Splechta—Mar 31, 2015
The positive of moving to the more powerful PS4 is that even when things get a bit too hectic, the framerate remains consistent. ...The transition to console controls, enhanced graphics and altogether smoother gameplay coupled with the insane amount content that Tecmo Koei games are known for make it worthwhile. ...Yes, the game still comes with the staggering amount of content, but unless you thought Toukiden was god-tier on the Vita, Kiwami won't really do much for you.
Read full review

9.00
Christian Chiok—Apr 12, 2015
Overall, combat is smooth, avoiding the more sluggish and sedate gameplay of some similar titles in the genre. The camera control is great and the use of lock on really helps when trying to take down the Oni with multiple combos and attacks. It’s honestly just plain fun to play. ...Toukiden Kiwami is definitely a great action RPG; while it isn’t as polished as the Monster Hunter series, this clone is definitely one of the best.
Read full review

8.00
Rich—Apr 06, 2015
Overall, Toukiden: Kiwami is a great game that is marred by repetition. With a huge amount of missions and quests to complete, as well as weapons and Mitama to acquire, there’s well over 60 hours worth of entertainment to be had. No other game on the Playstation 4 or Vita offers what this game has: epic battles against gargantuan beasts.
Read full review
See all critic reviews

Toukiden: The Age of Demons