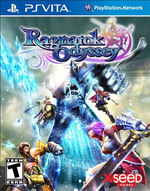 Ragnarok Odyssey is set in an original world based on Norse mythology where a battle is being waged between humans and giants after the fall of the gods had previously separated the races. Players create their characters from over 20,000 possible combinations based on customizable physical features, then select one of six specialized job classes. The game’s real-time battles are fast and furious as players can fling enemies skyward, follow them into the air for gravity-defying strikes, then finish off the combo by smacking them clear across the stage. Gameplay is driven forward by story-advancing and optional quests, and up to four players can fight together in online co-op mode.

3D Juegos open_in_new
3 Ratings
9.20
This game has not been reviewed. Be the first to review it!

9.00
Jim Sterling—Oct 30, 2012
For all its missteps as an action-RPG, it is simply flawless as an example of how to make a Vita experience work. Judicious use of touchscreen controls, beautiful visuals, a smartly broken-up mission structure and eerily swift loading times make this the gold standard for Sony's portable.
open_in_newRead full review

9.00
Vardas—Oct 20, 2012
With repetitive gameplay, many occasions where you have to grind, a not-so-balanced difficulty curve and less than stellar graphics, Ragnarok Odyssey Ace is definitely not a stand out in the monster-and-boss-hunting RPG genre. That said, it still may offer a bit of fun to the hardcore enthusiast, or those with a lot of time on their hands.
open_in_newRead full review

4.40
Josh Wirtanen—Nov 08, 2012
Ultimately, Ragnarok Odyssey is a game that’s painfully mediocre and flawed at its very core. It’s wrapped in a fairly respectable combat system and sparkled up with an incredible opening cinematic, but those things can’t make up for the sheer tedium of playing through the same areas and fighting the same monsters over and over again. If you have any respect whatsoever for the world or lore of Ragnarok Online, please don’t soil it by picking up this endless grind-fest.
open_in_newRead full review
See all critic reviewsarrow_forward