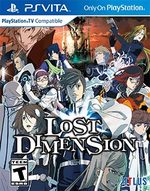 To subdue the threat The End poses to the entire planet, several countries create a special forces group called SEALED, which is comprised of eleven psychics with superhuman abilities. Each soldier has their own talents and skillsets to use in combat, which can be expanded after gaining enough experience in the field. Bonds of friendship will form amongst the members of SEALED, but be mindful of which allies to keep close, as The End mandates the player must begin eliminating teammates. Make sure to accuse the right teammate of being a traitor though, once the final battle with The End begins any remaining traitors will fight the main character alongside him.

4gamer.net
1 Rating
7.50
This game has not been reviewed. Be the first to review it!

7.50
James Galizio—Jul 27, 2015
Taken as a full product, Lost Dimension is one of the most unique Tactical RPGs that I’ve played in a long time. Although not everything about it is 100% perfect, enough about the game is unique and interesting that it can easily be recommended to both fans and newcomers to the genre.
open_in_newRead full review

7.00
Nathan Michalik—Aug 13, 2015
Lost Dimension isn't a game for the impatient. Learning the combat system and paying attention to each and every line of dialogue requires a large amount of focus but can feel massively rewarding when you get it just right. Those willing to invest will find that the loveable characters and attractive art style provide more than enough incentive to replay the game multiple times, but the generic story and often frustrating judgement system prove to be traitors at times.
open_in_newRead full review

6.00
Angelo M. D'Argenio—Jul 29, 2015
Lost Dimension is a fun and deep tactics RPG with interesting mechanics and a horrible story with horrible endings. Strategy gamers, war gamers, and anyone else who likes to crunch numbers will love Lost Dimension, provided that they don't care much about plot.
open_in_newRead full review
See all critic reviewsarrow_forward

Atelier Ayesha Plus: The Alchemist of Dusk

Ar nosurge Plus: Ode to an Unborn Star