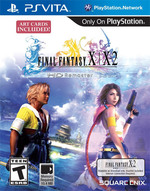 Final Fantasy X follows the exploits of the Summoner Yuna and her guardians as they battle an evil immortal enemy known as Sin. This beloved entry in the franchise includes side-quests such as the underwater sport of Blitzball and a monster battle arena, as well as a redesigned fighting system that mixes classic Final Fantasy elements with a "Sphere Grid" system.

Final Fantasy X-2 is the first true sequel in the popular RPG series, and picks the story up two years later. The world has entered into a period known as the "Eternal Calm". During this moment of change, the people of Spira have shunned the once-sacred teachings of Yevon, and embraced the use of the formerly forbidden machina. While many of Spira's inhabitants are enjoying this time of peace, evidence of the High Summoner Yuna's lost love Tidus surfaces, prompting her to begin a new quest to find him.

3D Juegos open_in_new
8 Ratings
9.30
This game has not been reviewed. Be the first to review it!

8.00
Robert Ramsey—Mar 28, 2014
Final Fantasy X/X-2 HD Remaster is a superb collection that's a sight to behold on Sony's portable system. Final Fantasy X remains an utterly enthralling journey that boasts endearing characters, an addictive battle system, and a brilliantly paced story. This makes the first game worth the asking price alone, but its sequel complements it nicely nonetheless, despite its shortcomings. Veterans will absolutely adore this trip down memory lane, while newcomers get to enjoy one of the most important JRPGs ever crafted in its very best form.
open_in_newRead full review

9.60
Jon Harding-Rathbone—Apr 10, 2014
Despite having a distinctly different feel to FFX, this sequel manages to be unique and different enough to hook the player in for countless hours. From the enhanced visuals, to the extra content, you really cannot go wrong.
open_in_newRead full review

8.00
Jim Sterling—Mar 10, 2014
While its HD upgrades highlight some cut graphical corners a little too clearly, Final Fantasy X/X-2 Remaster is still a handsome visual upgrade to a classic game that has only felt more remarkable and enjoyable with age.
open_in_newRead full review
See all critic reviewsarrow_forward