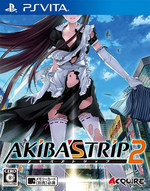 AKIBA'S TRIP: Undead & Undressed is an open-world action RPG in which players undertake numerous missions in a virtual recreation of Akihabara, Tokyo’s popular ”Electric Town” district. The player’s goal is to identify vampires called “Synthisters” with the help of an in-game smartphone app, then engage them in battle to strip their clothes off so their bodies are fully exposed to sunlight. Boasting a unique combat system in which everyday objects become weapons, multiple story routes, a varied cast of characters based on common anime and video game tropes and a narrative dripping with social satire and subtle nods to Japanese pop culture, AKIBA'S TRIP is a present-day supernatural adventure for the nerd in all of us!

4gamer.net
1 Rating
3.50
This game has not been reviewed. Be the first to review it!

7.20
Kyle Wakeling—Aug 19, 2014
Akiba's Trip is filled with the things an otaku loves; strange plots, fanservice, Japanese culture/references and a great location. What it doesn't offer however, is a lot of depth, an overly lengthy story line or any shame. You'll have to decide for yourself if this one floats your boat, but it's certainly floating mine.
Read full review

5.50
Jae Lee—Sep 02, 2014
At the end of the day, the humor alone can’t carry this title away from the chains of its boring, repetitive combat and poorly designed world. Those who can endure the tedium might be able to find enjoyment in the ridiculous premise and colorful cast of characters, but I certainly couldn’t.
Read full review

7.00
Zack Reese—Aug 20, 2014
While it may have its fair share of shortcomings, like its clunky combat and relatively few places to visit, there is plenty of here to to enjoy such as the high degree of customization and a script that the translators appeared to have a lot of fun working with. That along with the strong presentation, beautiful art design, and slick UI, there’s plenty here to enjoy and a definite purchase if you’re big into otaku culture. For everyone else, you may want to consider your options a little more carefully more before diving in.
Read full review
See all critic reviews