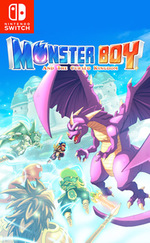 I was hyped for this one. I grew up playing Monster Boy on emulators - because living in Brazil means you're not getting old school consoles anytime soon - so the nostalgia came kicking in when I first heard of the kickstarter.

The game did not disappoint, although it kinda seemed too much like an indie game. I'll try to explain my reasoning. Owlboy, Undertale, Hollow Knight, Iconoclasts, Celeste and Bloodstained are all indie games. But they did not have a drop of that incomplete indie feel to it. They were super original. This game was not. It seemed like a fan recreation of an old MB game. A good one, yes, but that was the aftertaste.

Of course I enjoyed the game, the story was good, the gameplay too and the music and cutscenes were the best touch in my opinion. But maybe, another coat of paint over this game would have made it an AAA when it comes to metroidvanias.

Besides that, my only complaint about the game was the insignificance of the sidequests and completion. There's really little to no incentive to completing the game, and even the rewards for doing that are not worth your time. And there are sidequests, but they are so irrelevant you don't even want to embark on them.

So, this is my overly nitpicker review of this game. And I'm not being ironical or mistaken with the rating, for me it's really a 8.2 but with a lot of mistakes that should be corrected. And come on, even a small patch or update could have corrected most of them.

9.00
Chris Scullion—Dec 05, 2018
Monster Boy is a tremendous accomplishment. It’s a gorgeous looking game with a fantastic soundtrack and does its spiritual predecessors proud by nailing the Wonder Boy mechanics while still offering something that will appeal to modern audiences. As long as you can appreciate that it’s still very much an old-school game at heart and you’re going to get some 8-bit era platforming trickiness as a result, you’re going to thoroughly enjoy playing through this adventure for the 12-15 hours it’ll take you to beat it.
open_in_newRead full review

8.00
Alexander Pan—Dec 10, 2018
Monster Boy and the Cursed Kingdom not only pays faithful homage to Wonder Boy, particularly The Dragon's Trap, but by refining the solid foundations of its spiritual predecessors with modern affordances, it becomes a rich platforming adventure in its own right. With a well-realized world filled to the brim with secrets and excellent platforming mechanics that always keeps things interesting, the Cursed Kingdom is a place you will want to discover every corner of.
open_in_newRead full review

8.50
Neal Ronaghan—Dec 03, 2018
Some warts do show up, mostly stemming from a steep early difficulty curve and occasionally hard-to-judge hitboxes and jumps, but on the whole, Monster Boy and the Cursed Kingdom is a fabulous entry in a relatively dormant series. My future-gazing hope is that this team can have another go and make it more of a bolder, modern game than a warm, loving throwback to a series clearly near and dear to them.
open_in_newRead full review
See all critic reviewsarrow_forward

Shantae and the Pirate's Curse